Natalia Magnicaballi was born in Buenos Aires, Argentina and has been a principal dancer with The Suzanne Farrell Ballet since its conception in 1999 and with Ballet Arizona since 2002. A graduate of Teatro Colón, she became a principal dancer at the age of 19 with Julio Bocca’s Ballet Argentino. In Europe she joined the Italian company Aterballetto under Mauro Bigonzetti’s direction. Her repertoire includes the lead roles in the most beloved classic ballets. Natalia has premiered works by Jirí Kylián, Roland Petit, Maurice Bejart, Mauro Bigonzetti, Dwight Rhoden, Paul Mejia, Ib Andersen, Oscar Araiz, Mauricio Wainrot, Ana María Stekelman, Alberto Méndez, Christopher Wheeldon and Alexei Ratmansky. She has toured and
performed in the main houses and arena theatres around five continents including the Paris Opera Garnier and the Mariinsky Theatre. Natalia has been featured as one of Dance Magazine’s “25 to Watch” and named the “Best Dancer of the State of
Arizona” by The Arizona Republic.

Dance Fusion is in the Scottsdale Airpark | 7601 E Gray Rd, Suite B, Scottsdale 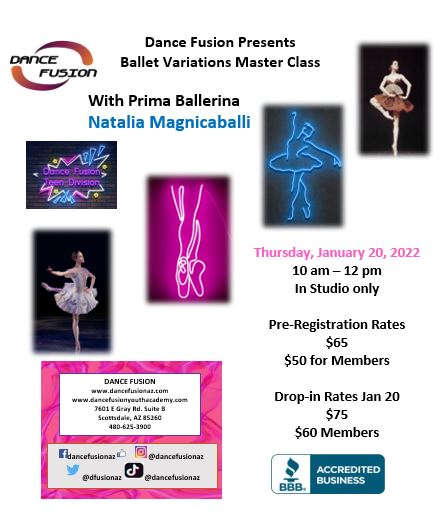